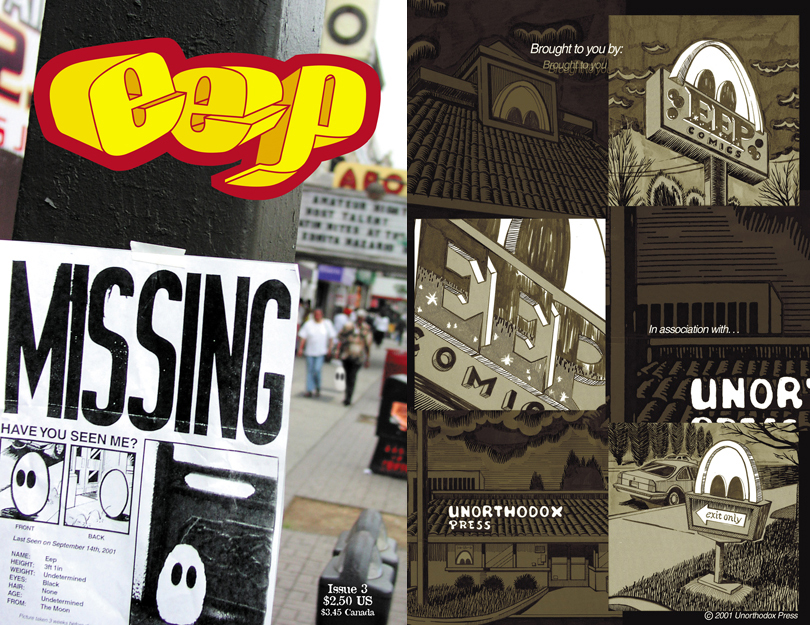 Eep! Back by popular demand!

Check out the new category in the above menu bar – Comics! (To download a copy of issue #3 of the Eep comic book, just click on the links below. Beware, though, they are large files, so it may take time to download them).

Interesting historical side note: Eep #3 was completed and printed less than a month before September 11th, 2001. Soon after the attack on our beloved monuments to capitalism (that statement was tainted with sarcasm, though I do think the attack was tragic), ‘Missing’ posters, similar to the one I created for the cover of Eep #3 littered the streets of NYC, in hopes that families and friends would soon be reunited. Due to the attack on the World Trade Center, the Small Press Expo (in Bethesda, MD), the independent comic book convention in which Eep #3 was slated to make its official debut, was canceled. So, independent comic book artists from the NYC area organized to put on an alternate alternative comic expo in Brooklyn called the ‘SPXiles’ which, from what I remember, was a huge success.
Interesting personal side note: And, Gaz, if you’re reading this (correct me if I’m wrong), I believe that convention was the first time we hung out for an extended period of time — it was fun!