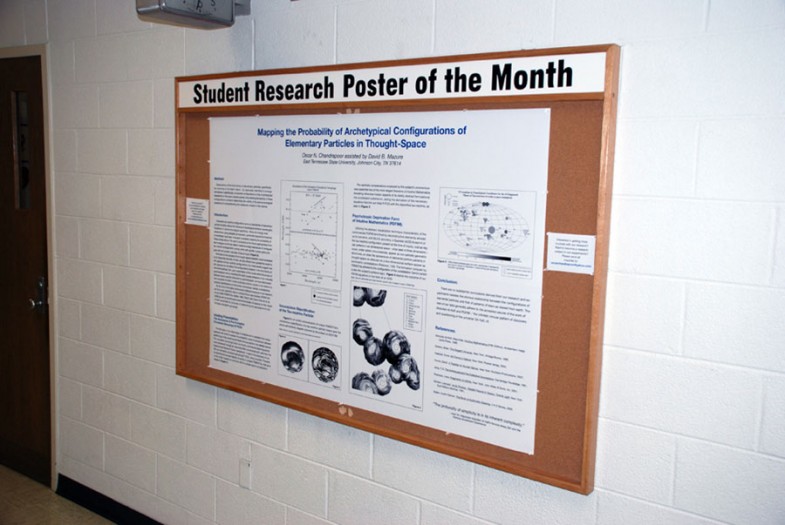 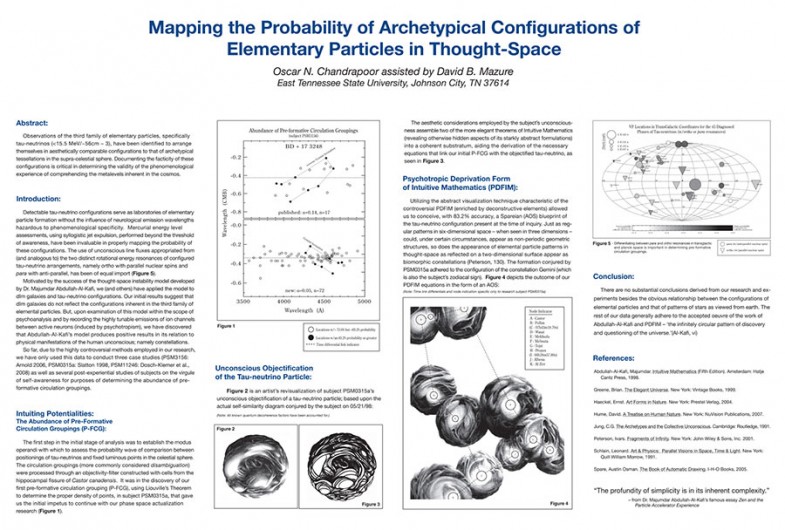 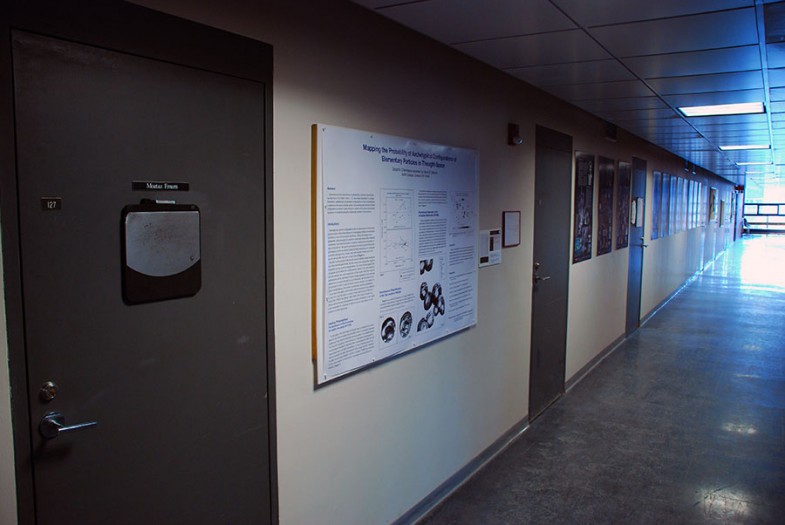 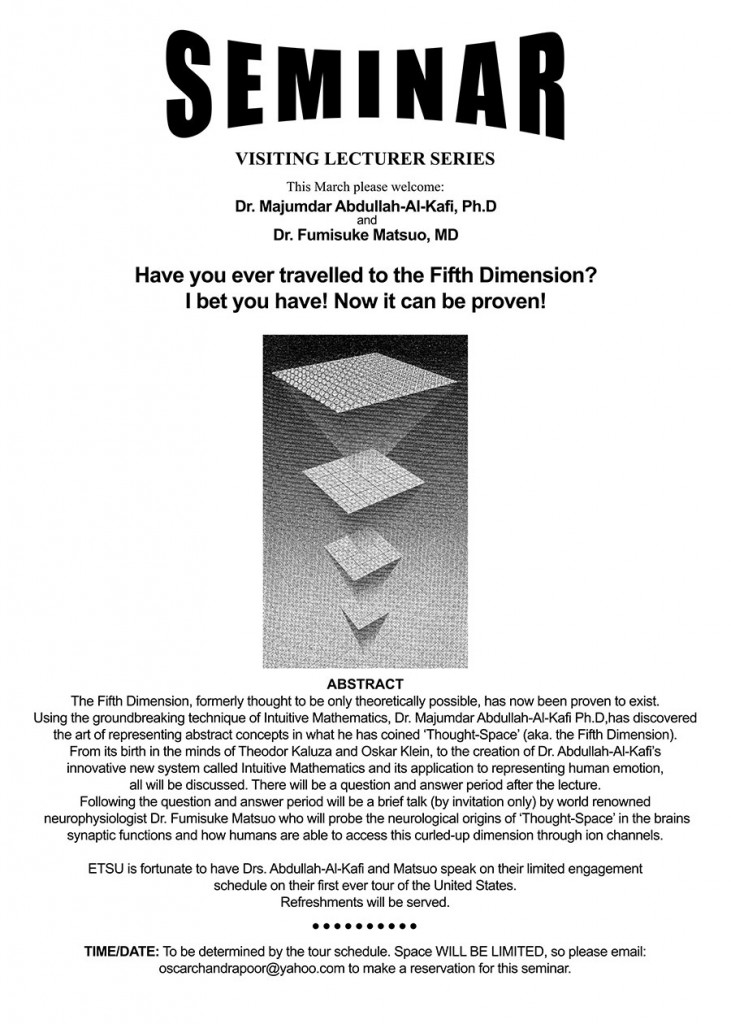 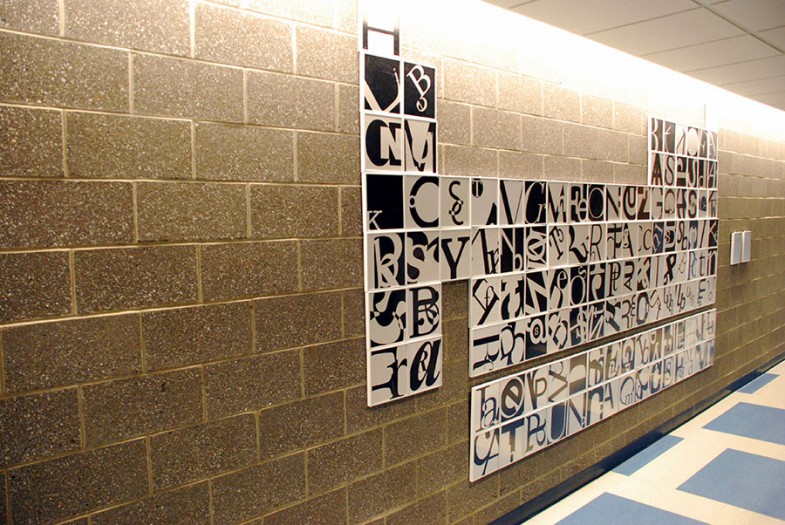 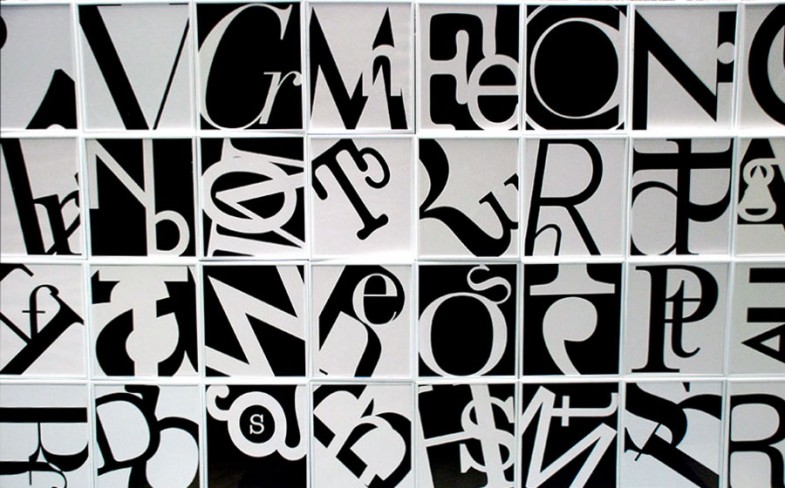 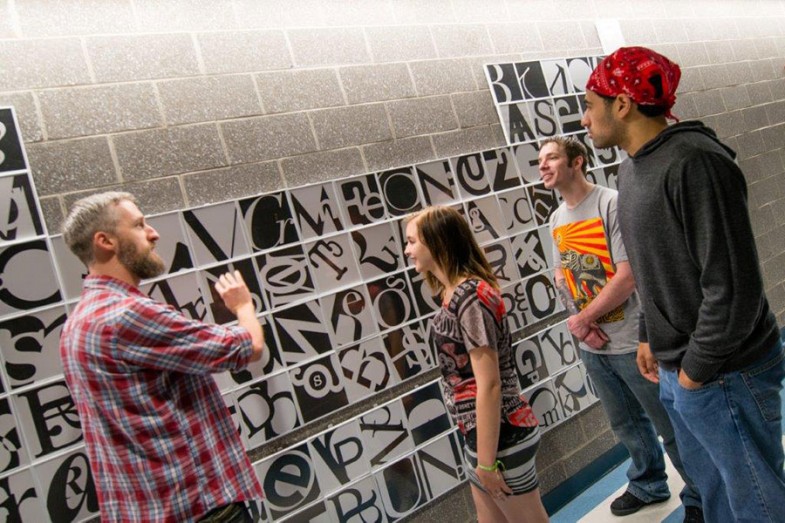 Images #1 - #3, titled Mapping the Probability of Archetypical Configurations of Elementary Particles in Thought-Space, is an impersonation of a student research poster that simultaneously incorporates aspects of art, physics, astronomy, (Jungian) psychology, astrology, and biology.

The location was chosen carefully as this poster is be experienced as if it were an actual research project based on scientific fact.In this manner, it acts as an impersonation of an actual science student research poster essentially establishing a rapprochement between the arts and sciences.

Fictitious poster announcing an upcoming seminar in Brown Hall (site of the Science Dept.) on the campus of East Tennessee State University. Several copies of the poster remained on display throughout Brown Hall for three weeks.

Non-scientists might be forgiven for looking at the jumble of giant graphic letters across from the chemistry labs at East Stroudsburg University’s Hoeffner Science and Technology Center and thinking that the alphabet got caught in a hurricane.

But science students and faculty who frequent the center see the artwork for what it is: a creative rendering of the Periodic Table of Elements, which provides a key framework for studying chemistry.

The 14 foot by 9 foot graphic design is the brainchild of Art and Design Professor David Mazure and was executed by two classes of his Communications Graphics students. Each student had to research an element, such as Sulfur or Iodine, and come up with a novel way to present it in art using digital designs.

So, for example, freshman Rachel Holly chose Helium and created the graphic so that part of her element is floating up in the box – much as the very light Helium might do.

“For people who study biochemistry or organic chemistry, they would pick up on the nuances,” said Holly, who is majoring in art and design. “It’s almost like you’re including an inside joke.”

Junior Henry Becker researched and designed the symbol for the element Radon, which is radioactive.

“I showed something that was dangerous or bold but it was the furthest right on the periodic table so it’s like the atoms are breaking apart,” said Becker, also an art and design major.

The periodic table, which was installed in April, is the largest piece of artwork in the five-year-old Science and Technology Center.

Professor Mazure’s own art practice is inspired by science and he has installed art in other science education buildings.

“I always think science can afford a little more creativity and art can benefit from more objectivity,” Mazure said. The periodic table “blurs the line between science and art but also can be used as a teaching tool, at least for inspiration.”

“C.P. Snow's famous book, ‘The Two Cultures’ in the 1950s characterized scientists and artists as belonging to two different cultures, but they share similarities in that both explore and investigate through experimentation,” Hawkes said. “I am proud to see our Art & Design students apply their talents to the Periodic Table of Chemical Elements, one of Science's most famous icons. It's a small but graphic way to reduce the cultural divide.”

The project inspired Becker, who plans to become a graphic artist.

“I’m totally ecstatic about it,” Becker said. “That project opened my eyes to simple solutions that are effective and creative in getting artwork out there.”