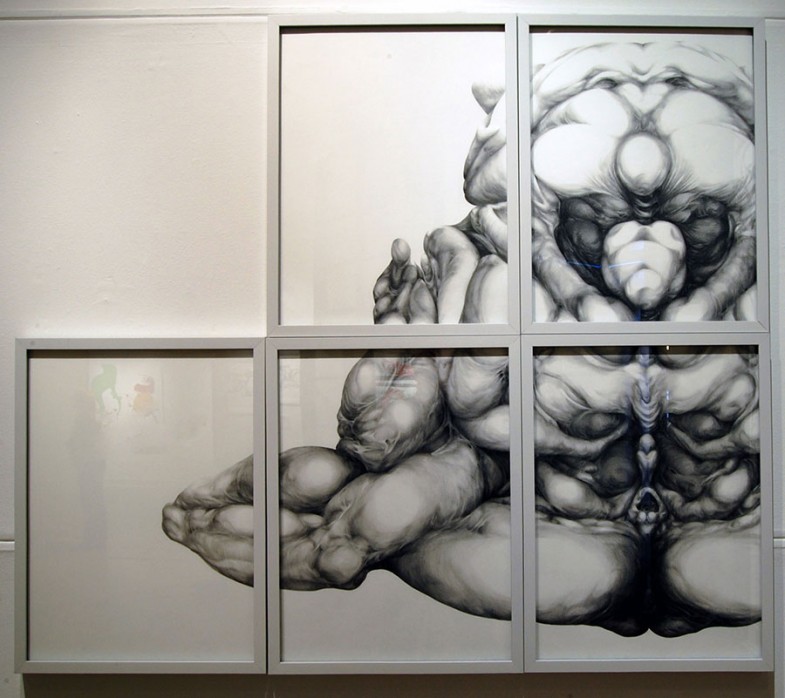 The universe is in a constant state of flux. Nothing is static. Everything is moving, changing, transforming; from the tiniest quark to the largest supercluster. The universe cares not the size of the elements that exist within it for they are all interdependent upon one another for their very survival. This interdependency is apparent when, upon close scrutiny, patterns begin to emerge. This modularity reveals a similarity between the microcosmic and macrocosmic facets of the universe; an infinite, interdependent loop of space and time.

Just as there is an order to the universe, so must there be a logical reason for every decision made in my creation process, from the medium, to the imagery, to its inevitable display. I am not devoted to any one medium and often discover that a mix of traditional and new technologies will achieve my desired goals. Choice of medium is dependent upon the message. Herein lies one of my most formidable challenges; how to unite the medium and message to strengthen one another.

My investigation into the inner-workings of the universe begins with a response to forms in nature. I focus on transformations of human forms. The work always begins with observational figure drawing. These drawings then undergo a scientific-esque process in which they are investigated, analyzed, dissected, and then transformed into new forms using both traditional and digital techniques, often alternating back and forth between the two.

Somewhere between observation and imagination, my mutated human forms emerge as language. Created specifically with the viewer in mind, each piece establishes an aura of questioning that operates in both the physical and mental spaces between the viewer and the work.

Largely inspired by quantum physics, my work challenges established belief systems through a theosophic integration of science, art and philosophy. I attempt to initiate a cerebral awareness of the concealed gestalt of the universe; the unknown, unexpected and unfathomed concepts of space and time. Teetering on the edge of two abysses, one of hope and one of meaninglessness, my work aims to transcend inward and outward beyond the scope of both.